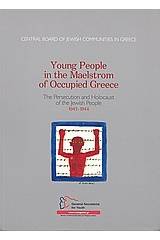 Young People in the Maelstrom of Occupied Greece


[...] This book is divided into three sections. It is about children forced to live in darkness at their most tender age; children in hiding under false names who dared not even go out in the streets. 1t is also about those who enjoyed the protection of Resistance forces in some areas, who joined their ranks and offered their services. And it is about the hardships and ordeals of life in the death camps as told by those who managed to survive and find their way back, though they were physically and emotionally devastated. In other words it is a book whose pages are full of emotional experiences undergone in horrific circumstances, which are recorded here for the first time by those who actually survived them. The conclusions draw themselves and the emotions speak directly to both the ordinary reader and the student of recent history. The publication of this work would not have been possible without the generous support of the General Secretariat for Youth, which we thank most warmly. Moses Constantinis President of the Central Board of Jewish Communities in Greece